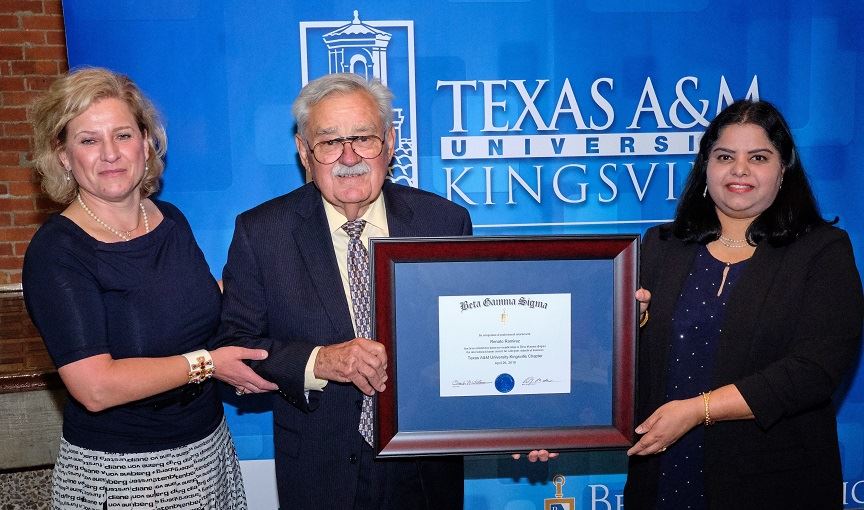 IBC Bank-Zapata President and CEO Renato Ramirez was recognized at the Texas A&M University - Kingsville (TAMUK) College of Business Honors Dinner and Ceremony on Friday, April 26 where he was named an honorary inductee of the Beta Gamma Sigma Society.

As a 2018-2019 Beta Gamma Sigma Chapter Honoree, Ramirez joins the elite ranks of innovative, high performing, and driven business leaders. Since 1913, Beta Gamma Sigma, the international business honor society, has inducted over 820,000 members worldwide in more than 190 countries. Beta Gamma Sigma has over 585 collegiate chapters at universities whose business programs are accredited by the Association of College Schools of Business (AACSB) International. IBC-Zapata and Renato Ramirez were instrumental in the accreditation process which provided the AACSB accreditation for the TAMUK College of Business.

IBC Bank-Zapata has been a proud partner of TAMUK for many years.  Officers from IBC-Zapata are involved with the Athletics Department, the Cesar Kleberg Wildlife Research Institute, the TAMUK Foundation, and various College of Business programs and initiatives.  Many of our current employees are TAMUK alumni and serve as bank officers and managers.