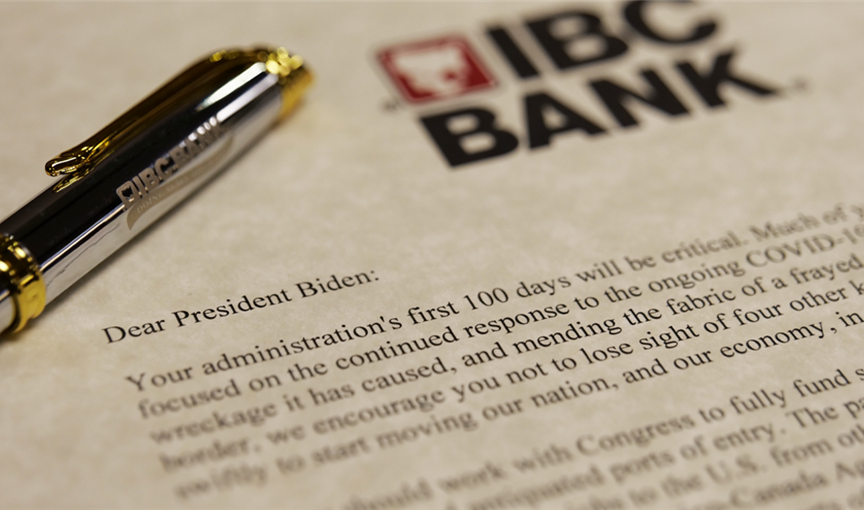 Your administration's first 100 days will be critical. Much of your time will, appropriately, be focused on the continued response to the ongoing COVID-19 pandemic and the economic wreckage it has caused, and mending the fabric of a frayed nation. But, as residents of the border, we encourage you not to lose sight of four other key issues that should be addressed swiftly to start moving our nation, and our economy, in the right direction.

First, you should work with Congress to fully fund staffing and improvements at our undermanned and antiquated ports of entry. The pandemic has exposed the dangers of far-flung supply chains. To return jobs to the U.S. from other countries, including China, Congress approved the United States-Mexico-Canada Agreement (USMCA) with strong bipartisan support. Now we must modernize our ports of entry to effectively and efficiently handle the increased trade resulting from this trade agreement.

We need transportation infrastructure to allow better ingress and egress from the ports of entry and major highways. Bringing our ports of entry into the 21st century will benefit the entire nation, increasing our global competitiveness and creating and retaining jobs in manufacturing hubs across the country - from Wisconsin to Pennsylvania, Washington to Ohio -- well into the future.

Second, our country's immigration system is desperately in need of reform. The last four years have decimated an already broken legal immigration system. While we need enhanced border security to keep bad people out, but we should make it easier for the right people to enter and stay in the United States.

Our immigration policies are at odds with the demographic realities of our aging population and lower birth rates that require more foreign-born workers - both low-skilled and high-skilled - to support a growing economy. Farmers and ranchers have trouble finding the seasonable labor they need, while high-tech companies have trouble locating engineers. The United States is in a global contest to attract and retain talent. To that end, providing permanent legal status to DACA recipients makes sound economic sense. Our policies must allow us to compete for the workers we need to fuel our economy, and retain the talent that already exists here but that lacks a certain future in our nation with permanent legal status.

Third, we encourage your designee for secretary of Homeland Security, Alejandro Mayorkas, to enact a 6-month moratorium on the expensive wall construction and land condemnation along the U.S.-Mexico border, and instead establish more effective, less costly measures for border security in Texas. While border wall construction in Arizona is predominately on federally-owned land such as military bases or national parks, in Texas the bulk of wall construction would be targeted for private property and severely impede farmers and ranchers' reasonable use of their land by destroying access to the Rio Grande River.

Rather than a wall, common-sense tactics to improve border security should include two of the highest priority requests from Border Patrol agents: cleaning up the Rio Grande riverbanks by removing non-native Carrizo cane and salt cedar to create a clear line of sight along the river banks and removing barriers to allow agents to better access the riverbank. Along with the deployment of a video surveillance network to quickly detect, track and respond to border threats, these steps would enhance border security far more effectively than a costly wall.

Finally, your administration should immediately lift the restrictions on surface crossings at our borders with Mexico and Canada. Businesses already hit hard by the COVID-19 pandemic have been devastated by the Department of Homeland Security's supposedly temporary border closures instituted in the early days of the pandemic. They continue to drag on, without any scientific or medical rationale.

After nine months of shutting out so-called non-essential travel across U.S. borders, including shoppers who account for as much as 60 percent of retail sales in border communities, the restrictions have left many businesses unsure if they will be able to come back once the pandemic is over.

Your first 100 days will be critical, and the steps your administration takes in that time will chart the course for our nation - and your administration -- over the next four years. We urge you to restore to Washington a proper appreciation and understanding for the role the border plays in our national security and economic prosperity. It will serve you and the country well.