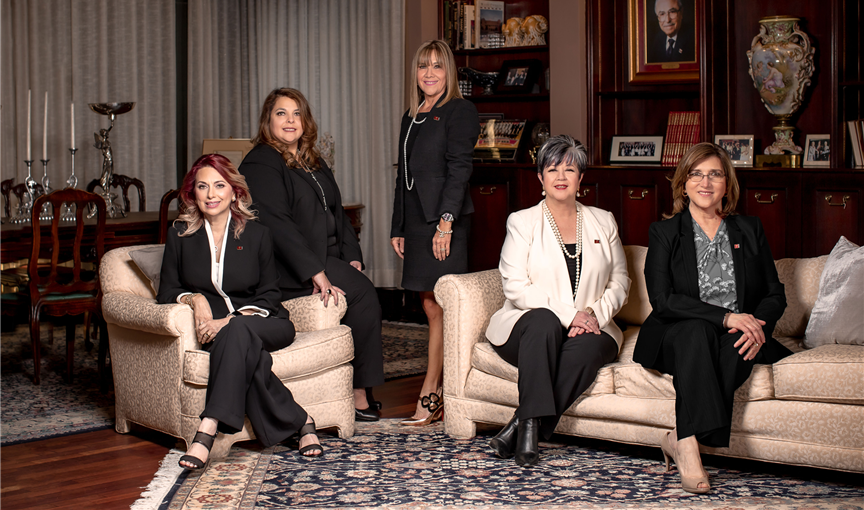 March 8 marks International Women's Day, a day to celebrate women's achievements. In a typically male-dominated industry, IBC Bank is proud that over half of its leadership team are women. Put in perspective, in 2019, only 21.9% of leadership roles in the financial services industry were filled by women.  IBC Bank's "We Do More" philosophy is an understatement for Imelda Navarro, Dalia F. Martinez, Eliza V. Gonzalez, Judith Wawroski Addison and Rosie Ramirez, who have been at the forefront of IBC's growth and have served as leaders in their community.

Each of these ladies brings a story of resilience, focus and dedication to their career.

Imelda is a 45-year veteran of the company and moved her way up from her first job as a file clerk at age 16 to be the first woman president of retail in the bank's history. It was not an easy road. She graduated Summa Cum Laude with her bachelor's degree from Laredo State University. She accomplished this working part time, rushing from school to work, many times eating as she drove to work and quickly changing into her uniform to start her afternoon work shift. Hard work and determination paid off. Soon after that, her work ethic also gained her recognitions as a community leader.  In April 2005, Hispanic Business Magazine named her one of its outstanding women leaders and later the same year recognized her as one of the 100 most influential Hispanic women in the country. In 2009, she was named one of the Top 25 Hispanic Women in the United States.  She has chaired boards at the Laredo Center for the Arts, TAMIU Alumni Association, Laredo Business Professional Women's Association, Financial Women International and the Domestic Violence Coalition. She is a former director of the Laredo Chamber of Commerce and has served on the board of the Laredo Commission for Women and on the advisory board for Mercy Regional Medical Center. She also served on the Governor's Commission for Women from 2016 to present.  Imelda attributes her success to focus and paying attention. She adds, "listening to your mentors is key to establishing yourself as a future leader. Remain relentless in your pursuit of perfection and excellence."

Dalia began her career with IBC Bank in 1990 as assistant vice president of training and worked her way up over 30 years to executive vice president of corporate operations, chief executive compliance officer and information technology and Electronic Banking team leader.  She juggles these titles and the duties that come with them with focus and grit. She credits her mantra of lifelong learning for her feats and accomplishments. Those "teaching moments" as she describes them, are the foundation of success in her view. "There is always a better or more efficient way of operating. I believe that working as a team will yield the best results for the company and ensure we go from "good to great!"

Dalia's recognitions also include Induction in Laredo Women's Hall of Fame highlighting her 20 years of service to the Laredo community. Dalia is an advisory board member for the Webb County Children's Advocacy Center. She and her husband are avid tennis players, which led to her volunteer work with Laredo Tennis Association as an advisory director. She has also proudly served as the president of United Way Laredo, Salvation Army Laredo and the Webb County Children's Advocacy Center, and as a board member of the Laredo Medical Center, Texas.  Dalia represents IBC on various banking committees of the Consumer Bankers Association, American Bankers Association and the Mid-Size Bank Coalition of America (MBCA). Most notably  Dalia recently represented MBCA by testifying  before Congress advocating for financial institutions regulatory reforms, prompting Rep. Denny Heck of Washington to acknowledge in his 5 years on that position he had not seen testimony presented as strong and clear and supportive, adding she was a credit to her profession.

In 1980, Eliza began her career with IBC Bank as a secretary in the Accounting Department, and for over four decades has served in several positions and now executive vice president of corporate divisions.  Eliza is no stranger to the many shareholders of the company. She personally oversees the investment relations component with great pride adding, "From parents, to their children to their grand children, we have seen shareholders experience great success in their investment growth within the company. It's a great feeling to see them happy." You will find Eliza at the helm of every annual meeting bringing great news to their investors.

Eliza also maintains a strong presence in the community. She has been past president of the Boys and Girls Clubs of Laredo and is now a lifetime director. She has also served as past president of both the Laredo and Texas chapters of Financial Women International and the Laredo Business and Professional Women's Association and on the boards of the Girl Scouts South Texas Council and the Webb County Chapter of the American Red Cross. She is an alumnus of the 1996 Leadership Texas class. Her favorite past time outside of work is practicing her faith as parishioner of St. John Neumann Church and family time with her husband, two children and grandchildren.

Judith joined IBC Bank in 1992 on a part-time basis while attending the University of Texas at Austin.  After graduating with her bachelor's degree in accounting, she became a full-time staff accountant in 1996 and worked her way up through the ranks to executive vice president and chief accounting officer of corporate financial accounting. She also serves as treasurer and chief accounting officer for International Bancshares Corporation. As IBC's Chief Financial Officer, she helps leaders navigate the various regulatory and financial reporting requirements.

As a mother and wife, she puts a lot of effort into balancing work, family and community service. An exercise she has achieved as president of the board of Casa de Misericordia (CASA) and treasurer of the Laredo Little Theatre. As president of CASA, she ensures the organization provides the most holistic service and support possible to its clients while remaining in compliance with federal and state laws. She has held leadership positions in organizations including Leadership Laredo, the Laredo Center for the Arts, the Laredo Women's Commission and the March of Dimes. Judy adds, "you must hold yourself accountable in anything you do. Achieving your goals means taking responsibility and ownership over your tasks or your job."

Rosie Ramirez's role in the Human Resources department has changed dramatically since she joined IBC Bank in 1989, from serving 500 employees with one payroll clerk to more than 3,000 employees and an entire department dedicated to HR. Rosie now serves as executive vice president and manages all human resources and training throughout the bank's two-state footprint. Through the decades she has seen the role of HR evolve. While managing people comes with ease for her, she also states, "It has been interesting to see how employee thinking has evolved through the decades. No matter at what level, an employee must manage their morale while seeking empowerment. Every employee must do their share to add value to the job and the company. I strive for that and remind employees to do the same."  Day in and day out employees throughout IBC look to this leader for guidance and mentorship. Rosie is a proud Longhorn grad of the University of Texas at Austin where she attained her bachelor's in social work yet considers raising her two children her greatest achievement.

Rosie serves on the board of United Way of Laredo and was board president in 2019. She is past president of Financial Women International and a member of the Laredo Business and Professional Women's Association and Leadership Texas. To this day she is balancing her IBC HR workload, family life and community service with ease, fortitude and determination.

Each of these leaders served an important role during the COVID-19 pandemic. They were instrumental in establishing IBC protocols and ensuring IBC employees and customers are safe, not an easy task when dealing with multiple counties, 188 cities and two states.

On this International Women's Day, we applaud these five leaders for their hard work and dedication. Each of these women has a remarkable success story. They are testimony that the glass ceiling can be broken. We thank them for helping shape IBC into the company it is today.