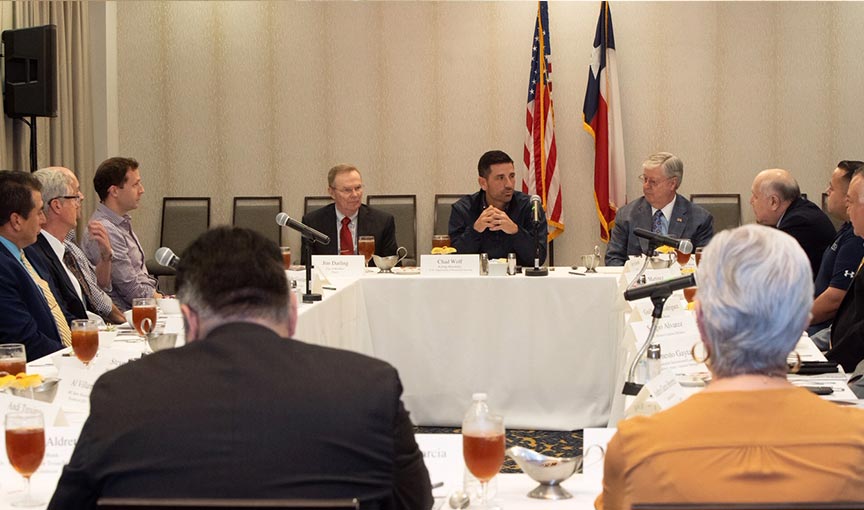 (Nov. 22, 2019) LAREDO, Texas - IBC Bank Chairman and CEO Dennis E. Nixon, along with other bank executives and leaders from private sector companies across South Texas, welcomed acting Homeland Security Secretary Chad Wolf to McAllen, Texas on Thursday, Nov. 21. Wolf was designated as the Acting Secretary of Homeland Security and confirmed as the first Under Secretary of the U.S. Department of Homeland Security's (DHS) Office of Strategy, Policy and Plans (PLCY) on Wednesday, Nov. 13. During his first full week in office, he made it a priority to visit the Texas border. "Historically, the Secretary has visited with border and customs personnel," explained IBC Bank Chairman and CEO Dennis E. Nixon. "This meeting was unprecedented in that Secretary Wolf made it a priority to meet with private sector leaders who are intimately familiar with the challenges faced at our ports of entry. We are grateful that he has made it clear that trade and port of entry issues are priorities." During the meeting, representatives from produce importers, customs brokers, transportation companies and more met with Secretary Wolf to discuss the critical needs of our country's ports of entry, in anticipation of the passage of the United States-Mexico-Canada Agreement (USMCA). "As companies and individuals who live and work on the border every day, and whose businesses, customers and employees rely on international trade, it is imperative that we have a seat at the table when it comes to issues affecting the border," explained Nixon. "Our ports of entry are in desperate need of infrastructure improvements, additional agricultural inspectors, increased Customs and Border Protection staffing, and more. Secretary Wolf's willingness to sit down with members of the private sector to gain first-hand knowledge of issues affecting us speaks volumes about the importance of Texas and the border to our nation's economy." The meeting with Secretary Wolf comes on the heels of Nixon being named chair of the Trade Policy Working Group of the U.S.-Mexico CEO Dialogue. The group strengthens economic and commercial ties between the two countries by convening private sector leaders from the United States and Mexico to provide joint recommendations for their respective governments on priorities in the bilateral trade and investment relationship. The Dialogue has focused heavily on the issues at ports of entry and ratification of the USMCA, as both countries have interests in staffing and infrastructure. "On behalf of IBC Bank and the other meeting attendees, we are thankful to Secretary Wolf for taking time to hear about what life is like day in and day out for businesses on the border," said Executive Vice President Gerry Schwebel, who was also in attendance. "The meeting was insightful, informative and truly the beginning of a mutually beneficial relationship between all parties." Schwebel frequently represents IBC Bank and its customers with top government and business leaders in the United States, Mexico and Canada. His knowledge and unique overview have led him to present expert testimony before Congress on issues regarding U.S.-Mexico trade, including NAFTA. In addition to Nixon and Schwebel, IBC Bank-McAllen President and CEO Adrian Villarreal, IBC Bank-Brownsville President and CEO Al Villarreal, Senior Vice President Eddie Aldrete and McAllen Mayor Jim Darling were also in attendance. "Our meeting with Secretary Wolf has opened doors for our customers and the community," said Nixon. "I look forward to our next visit to Washington where we can continue to build on this momentum with our nation's policy makers, leaders and border businesses." About IBC Bank
IBC Bank and Commerce Bank are divisions of International Bancshares Corporation (NASDAQ: IBOC), a $12 billion multi-bank financial holding company headquartered in Laredo, Texas, with 189 facilities and 285 ATMs serving 89 communities in Texas and Oklahoma. IBC Bank's slogan "We Do More" reflects the bank's dedication to the growth and success of the customers and the communities it has been serving since 1966. International Bancshares Corporation was ranked 22nd on Forbes' prestigious list of 100 Best Banks in America in 2019. MEMBER FDIC / INTERNATIONAL BANCSHARES CORPORATION. Follow our Facebook page, @IBCBankWeDoMore. More information is available at ibc.com.
USD -
: MMM DD, HH:MM AMPM EDT
Investors
Personal
Business
International
Online Center Options
Frequently Asked Questions
Business Banking
Follow Us:
© IBC BANK