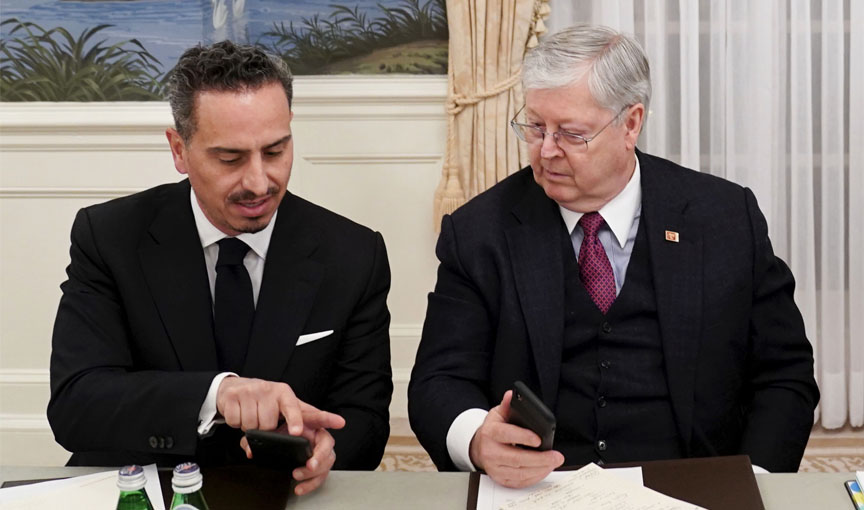 (Dec. 18, 2019) LAREDO, Texas - IBC Bank Chairman and CEO Dennis E. Nixon, a longtime advocate for free trade who has worked hard for the passage of the USMCA trade agreement, was recently named co-chair with his Mexican counterpart, of the Trade Policy Working group of the U.S.-Mexico CEO Dialogue. The group strengthens economic and commercial ties between the two countries by convening private sector leaders from the United States and Mexico to provide joint recommendations for their respective governments on priorities in the bilateral trade and investment relationship.

"As a community bank, IBC Bank is committed to creating economic opportunity in the communities we serve," said Nixon. "In order to offer the best service to our customers, we must be engaged on the issues that affect them. I am proud to help lead the Trade Policy Working Group with Moises, because free trade is absolutely crucial to the economic success of both of our countries."

U.S. trade with Mexico and Canada reached nearly $1.4 trillion last year and supported 12 million American jobs in manufacturing, agriculture, technology and the service sector in all 50 states. The U.S. exported approximately $289.7 billion and $265 billion in goods to Canada and Mexico, respectively, in 2018, according to the Office of the U.S. Trade Representative.

IBC Bank and its senior leaders have been integrally involved in promoting North American Free Trade since the initial negotiation of NAFTA in the 1990s, through the more recent negotiation of USMCA. The continuation of the world's most significant free trade agreement is essential for economic growth and prosperity in all three USMCA nations, which is why IBC Bank has been a passionate and dedicated advocate for its ratification.

The U.S.-Mexico CEO Dialogue was created in 2013 by the U.S. Chamber of Commerce and U.S.-Mexico Economic Counsel to strengthen economic and commercial ties between the two countries.  The group convenes CEO's of U.S. and Mexican companies that are committing resources and investing in both markets to advocate for bilateral trade and commercial relationships. The U.S-Mexico CEO dialogue is committed to working with both governments to set policy priorities and share best practices that strengthen U.S.-Mexico commercial engagement, enhance collective competitiveness in the global marketplace and grow both economies. The CEO dialogue leaders were actively engaged in the USMCA negotiations.