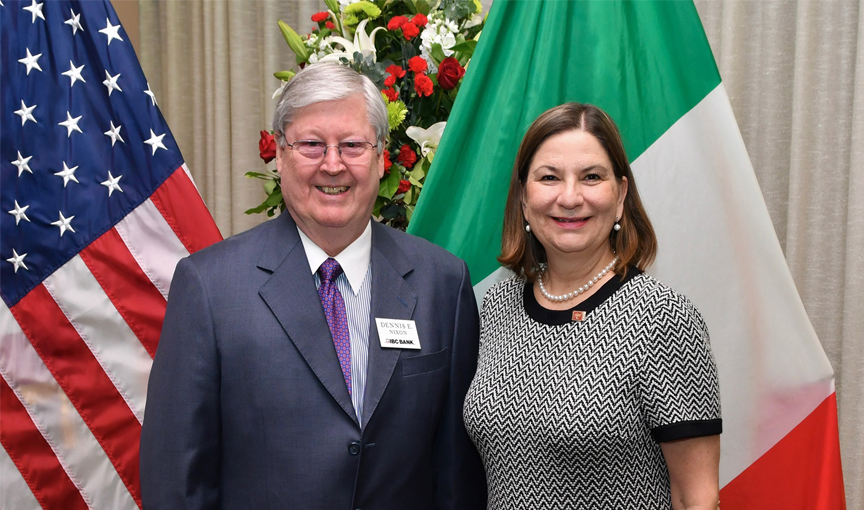 (OCT. 10, 2019) LAREDO, Texas - Today, IBC Bank hosted a reception for the Mexican Ambassador to the United States, Martha Bárcena Coqui, at the Sánchez Neiman Suite located in the IBC Main Bank building in Laredo. The event was held in honor of Ambassador Bárcena Coqui's being named Mrs. South Texas 2020 by the Washington's Birthday Celebration Association (WBCA) of Laredo and to celebrate the longstanding partnership between IBC Bank and its Mexican neighbors. This year marks the first time the WBCA has changed the recognition for Mr. to Mrs. South Texas and the first time a foreign dignitary has received the prestigious recognition.

"We are honored to have Ambassador Bárcena Coqui join us at this event," said Dennis E. Nixon, Chairman and CEO of IBC Bank. "As a good friend, we look forward to championing with her on future projects as well as issues facing both of our countries such as the USMCA. We are thrilled that IBC Bank can continue to contribute and foster strong relationships with our neighbors. We often say, ‘Nuestros Vecinos y Amigos Para Siempre'."

Mr. South Texas is presented each year to a deserving individual who has made a significant and lasting contribution to the growth and development of Laredo and the South Texas region. Nixon was named Mr. South Texas in 2010.

Ambassador Bárcena Coqui has been Mexico´s delegate to the United Nations, the Organization of American States and UNESCO, as well as Head of Delegation in sessions of the Forum on Migration and Development. She has participated in multiple international conferences, including the G-20 and the World Humanitarian Summit.

IBC Bank was founded on the border of the United States and Mexico in 1966, and promotes bi-lateral trade at the highest levels of government. The company's leaders sat at the negotiation table at the signing of the original NAFTA, is playing a pivotal role in shaping a modernized trade agreement, and advocates for sensible strategies that address immigration and trade issues that impacts their customers.