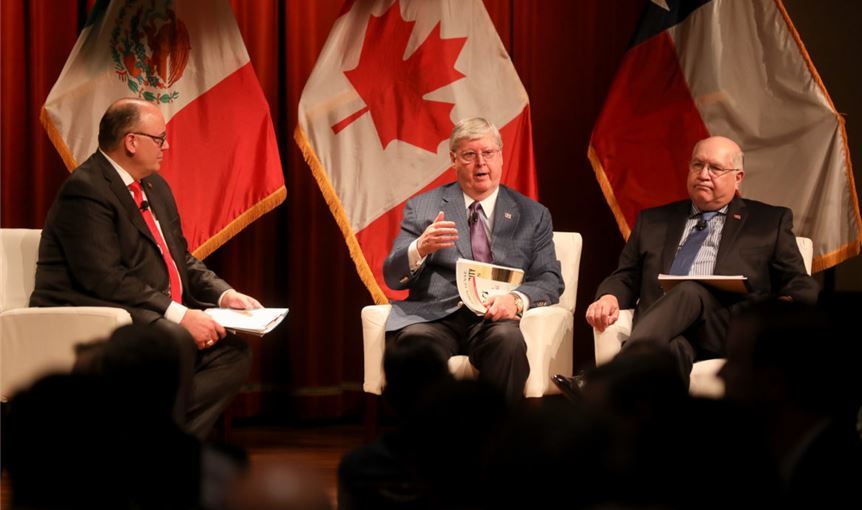 (Jan. 16, 2020) LAREDO, Texas - "The ratification of USMCA is a defining generational moment for our local communities and our country," stated Dennis E. Nixon, president and CEO of International Bank of Commerce and chairman of International Bancshares Corporation, following the Senate's sweeping final approval of the trade agreement.

"USMCA delivers an agreement that will create more jobs, modernize trade in the digital age and foster innovation. This agreement will continue to build upon the economic progress we have made for more than twenty-five years, and reflects the reality of today's highly competitive globalized economy. It continues the success of the largest free trade zone in the world," Nixon continued.

U.S. trade with Mexico and Canada reached nearly $1.4 trillion last year and supported 12 million American jobs in manufacturing, agriculture, technology and the service sector in all 50 states. USMCA contains enforceable core environmental and labor standards, improvements long sought-after by Democrats. Mexico's Congress has already passed labor reforms required by the agreement and these provisions are more stringent than in any other U.S. trade agreement.

The White House estimates that USMCA will add half a percentage point to U.S. economic growth, create several hundred thousand jobs and spark up to $100 billion in new investments. The trade agreement will make the USMCA countries one of the most competitive regions in the world.

IBC Bank has been integrally involved in promoting North American Free Trade since the initial negotiation of NAFTA in the 1990s, through the more recent negotiation of USMCA. The continuation of the world's largest free trade agreement is essential to maintain the region's competitive advantage, which is why IBC Bank has been a passionate and dedicated advocate for its ratification.

"In this highly politicized environment, there aren't many issues about which Democrats and Republicans can find common ground. This was one of them," said Nixon. "Those of us who live and work on the border understand that the United States, Mexico and Canada truly share a North American economy."

Internationally, Nixon is recognized for playing an instrumental role in the passage of the North American Free Trade Agreement. In May of 2008, IBC was recognized with the United States-Mexico Chamber of Commerce's Good Neighbor Award for the bank's contribution to the passage of NAFTA on its 15th anniversary.

Nixon has also helped create and lead advocacy organizations like the Association of South Texas Communities, Texas Border Coalition, Border Trade Alliance and the Alliance for Security and Trade. Nixon is currently a member of the U.S.-Mexico CEO Dialogue, an elite group of U.S. and Mexican chief executives whose members address core issues in the bilateral relationship between the two countries.

of IBC Bank, is widely regarded as a leading expert on international trade and finance. Schwebel frequently represents IBC Bank and its customers with top government and business leaders in the United States, Mexico and Canada. His knowledge and unique overview have led him to present expert testimony before Congress on issues regarding U.S.-Mexico trade, including NAFTA, transportation and logistics, international finance and U.S. immigration reform.

Schwebel is also the immediate past president of North America's Strategy for Competitiveness (NASCO), which is a tri-national trade coalition (U.S., Canada, and Mexico) that advocates for competitiveness through logistics, transportation infrastructure, security, energy and a skilled workforce.

Additionally, Schwebel is involved with the U.S. Chamber of Commerce as a member of the U.S.-Mexico Economic Council (USMXECO). This new organization serves as a platform for both the U. S. and Mexican private sectors to work together in the creation of innovative solutions for shared policy challenges, which leads to boosting growth and creating jobs across North America.

As a community bank, IBC Bank is committed to creating economic opportunity in the communities it serves.  NAFTA has had a profoundly positive economic impact on the U.S. economy, and in the states of Texas and Oklahoma in particular.  USMCA will continue this progress for the next generation.