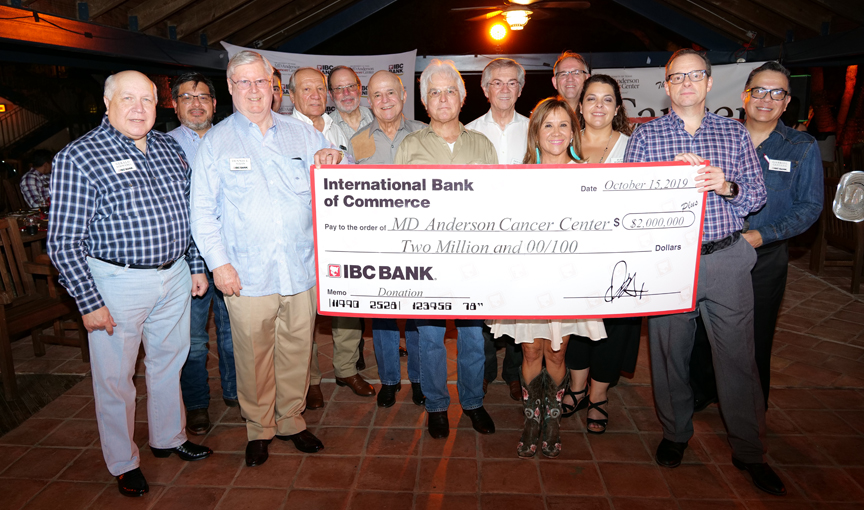 (Oct. 21, 2019) LAREDO, Texas - IBC Bank demonstrated how together, "We do More" by presenting a $2 million check to the University of Texas MD Anderson Cancer Center to celebrate the completion of the bank's "Give Cancer the Boot" fundraising campaign. The presentation took place at a dinner and dance at the IBC Bank -Laredo Lago del Rio on Tuesday, October 15th, featuring live music from Ross & Friends.

IBC Bank's locations across Texas and Oklahoma had been hosting special events and fundraisers since May 10th in order raise $1 million in donations from the community. Every dollar raised was matched by IBC Bank to reach the final $2 million donation.

"We are humbled by the outpouring of support and contributions we received from our customers, friends and neighbors across our two-state footprint," said Dennis E. Nixon, IBC Bank Chairman and CEO and a cancer survivor himself. "At some point in each of our lives we have been touched by cancer, whether through a family member, friend, colleague or ourselves. From $1 to $50,000, our communities dug deep and stepped up to help ‘Give Cancer the Boot'." Nixon added, "throughout all of our markets people came together at golf tournaments, fashion shows and marathons to raise money to end cancer. Together "we do more".

As a Senior Member of the Board of Visitors of MD Anderson, Nixon has enthusiastically supported cancer research and the work of MD Anderson. In 2016, IBC Bank celebrated their 50th anniversary and donated $2 million to MD Anderson as part of a multi-community campaign. MD Anderson Cancer Research Center, ranked #1 in the world, has been among the trailblazers focused on studies to combat this deadly disease. One of their leading and eminent researchers, Dr. Jim Allison, was awarded the 2018 Nobel Prize in Medicine for launching an effective new way to attack cancer by treating the immune system rather than the tumor. MD Anderson is the world's most impactful cancer center and treats more than 140,000 patients from over 120 countries each year.