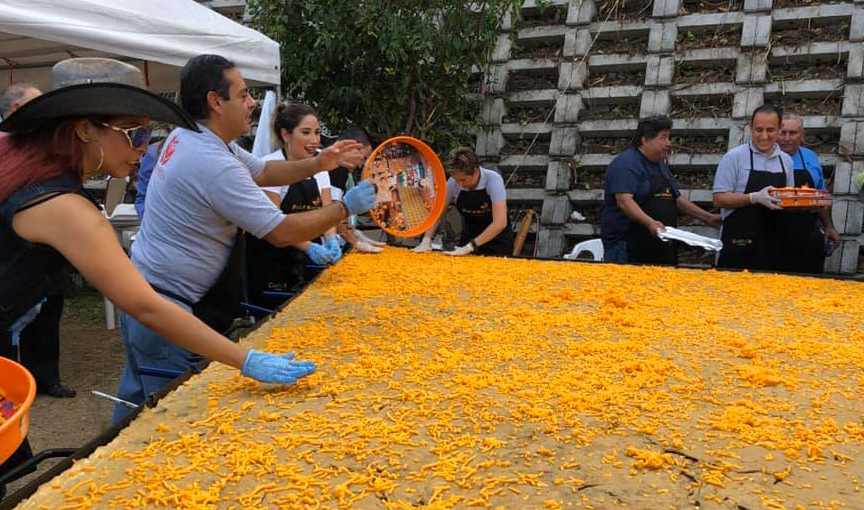 In 1943, the nacho was born in Piedras Negras, Coahulia Mexico located across the Rio Grande from Eagle Pass, Texas. The citizens of Piedras Negras, Coahuila Mexico and Eagle Pass, Texas have shared similar culture, traditions and food for years. Little did they know that the invention of the nacho would become a hit in both nations. Peña, who is one of three presidents in the history of the festival, wanted to celebrate that connection by supporting the development of the Nacho Fest, which is held along the banks of the Rio Grande River every year.

"It is an honor to witness how far we've come from when we first started back in 1995," said Peña. "The Nacho Fest is proof that the U.S. and Mexico are stronger when we work together. We will continue to spread that message not only across both countries, but around the world."

In honor of the 25th anniversary, the festival put its efforts into crafting the world's largest nacho. Upon its completion, the nacho fed more than 300 people at the festival. While Guinness World Records doesn't officially have a category for the world's single largest nacho, current president Dr. Adalberto Peña De Los Santos is planning on registering the bi-national dish in 2020 to commemorate the festival's silver anniversary.

The Nacho Fest has never charged for admission as a way of bringing people together from both sides of the border. The festival featured exotic and traditional nacho team competitions (the biggest competition in the world), a beauty pageant (Señorita Turismo), and fastest jalapeño-eating contest, among many performances by rock, pop, norteño bands, comedians and clowns.

"We are honored that one of our team members played such an important role in the creation of an event that brings the United States and Mexico together," said Hector J. Cerna, IBC Bank-Eagle Pass Region president & CEO. "Our hope is that this event can set an example for others to show that we are stronger as a team."

Everyone in attendance had the opportunity to enjoy generous amounts of tortilla chips, cheese and jalapeños.

IBC Bank-Eagle Pass is a member of International Bancshares Corporation (NASDAQ: IBOC), a $12.2 billion multi-bank financial holding company headquartered in Laredo, Texas, with 189 facilities and 288 ATMs serving 89 communities in Texas and Oklahoma.  IBC Bank's slogan "We Do More" reflects the bank's dedication to the growth and success of the customers and the communities it has been serving since 1966.  International Bancshares Corporation was ranked 22nd on Forbes' prestigious list of 100 Best Banks in America in 2019. IBC Bank-Eagle Pass has been serving the area since 2002 and has a retail branch network of 11 locations. MEMBER FDIC / INTERNATIONAL BANCSHARES CORPORATION. Follow our Facebook page, @IBCBankWeDoMore. More information is available at ibc.com.