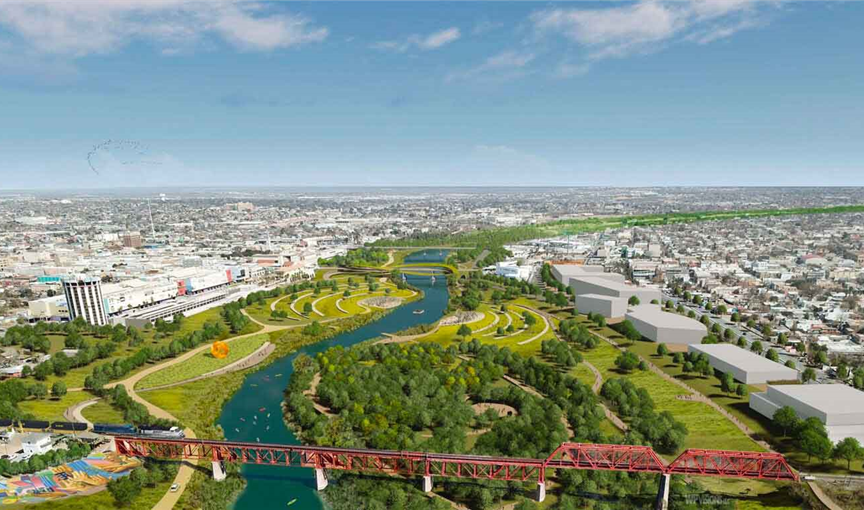 Our border community - in Laredo and in Nuevo Laredo - has the chance to create a unique amenity that will benefit the local economy, increase quality of life for residents of both cities, enhance border security, and clean up our only source of drinking water, the Rio Grande.  We should seize this historic opportunity actively supported by U.S. Ambassador to Mexico Ken Salazar and Mexican Ambassador to the U.S. Esteban Moctezuma and move forward with plans to create the Binational River Park.

In our area, the Rio Grande is a geographic boundary and our primary water source - but not much else.  The quality of untreated water is often poor. Invasive plant species such as Carrizo cane and saltcedar have proliferated along the riverbanks, crowding out native vegetation while providing concealment for illegal activity.

Despite having the Rio Grande, an iconic American Heritage River,  right in our back yard, few people "go" to the river for recreation or entertainment as they might do in San Antonio, Oklahoma City, Chicago and countless other cities, large and small.  The Binational River Park would change that.

This 6.3-mile park straddling both sides of the Rio Grande would transform the urban heart of our two cities and create a unique regional landmark to be celebrated by residents on both sides and visitors alike. It would serve as a demonstration of what the river could and should be - alive and thriving instead of being fenced off by an ugly wall that would essentially destroy it as an ecological asset for future generations.

Last year, the Laredo City Council and a binational working group selected San Antonio-based architecture and design firm Overland Partners to conceptualize the park.  After months of work, we now have a conceptual vision of what the park would look like.

Overland describes it as "an ecological restoration project, one that will reestablish the river's ecosystem, revitalize the economy, and add cultural assets such as public art to attract tourism on both sides of the river and transform the space into a distinctive international landmark that joins two communities and nations into one."

Since the founding of Laredo in 1755, our two communities have been tightly integrated culturally, socially and economically. I describe them as "one city in two countries," and soon as "one city, one park". Our challenge now is to secure the funding needed to make this worthy project a reality from both the public and private sector.

Initial estimates suggest the park may cost several hundred million dollars.  While that may sound like a significant sum, we believe that the economic, environmental and health benefits that would accrue from this project will be far greater and last for generations.

San Antonio offers a powerful example of how revitalizing a river can transform communities. While the San Antonio Riverwalk opened in 1941 and is known worldwide, the San Antonio River north and south of the downtown "horseshoe" of restaurants and attractions was essentially a neglected drainage ditch until much more recently.

The San Antonio River Improvements Project not only enhanced the River Walk as a tourist destination, it also created an amenity that local residents enjoy every day.  A Binational River Park in Laredo would benefit the 636,000 residents of Laredo and Nuevo Laredo in similar ways, and welcome visitors from beyond.

While the return on an investment in the proposed Binational River Park is clear, public spending on other border projects aimed at increasing security is of much more dubious value.  The average cost to build a single mile of border wall exceeds $25 million that would do little to curb or address migration.

A small fraction of the enormous sums that the federal and state governments have spent on border security could be diverted to this effort with much greater effect. The proposed park will do far more to deter criminal activity and border crossings while creating a community asset on both sides of the border at a lower cost to taxpayers, sending the message that this "grand" river unites us more than it divides us.

In a statement issued this past February, the binational working group on which I proudly serve said that the project "reclaims our shared history, spurs the economy, promotes security on both sides of the river, and restores the ecological treasure we call home."  The Binational River Park would transform our border community and is worthy of both public and private support.