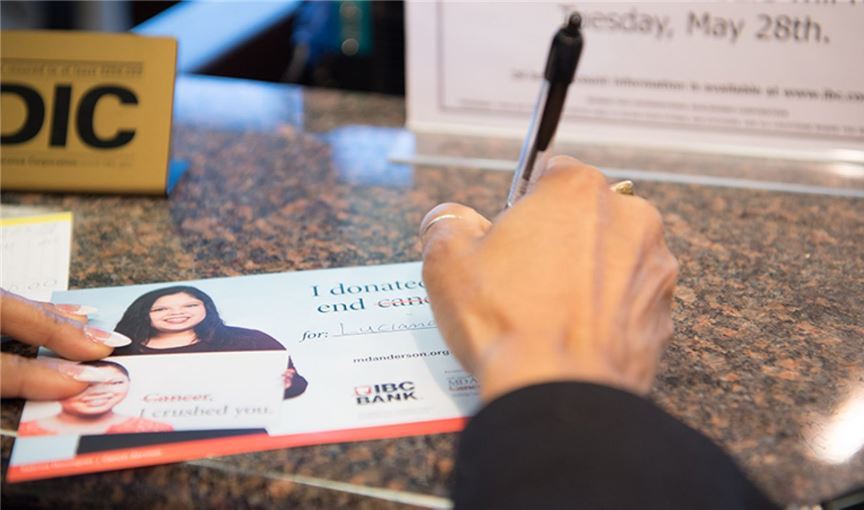 Companies and communities can be powerful partners in advancing MD Anderson's mission to end cancer.

Such was the case in May 2019, when Laredo-based IBC Bank challenged employees, customers and residents in the 88 Texas and Oklahoma communities it serves to raise $1 million for MD Anderson. The bank pledged to match the community gifts dollar for dollar.

People embraced the challenge wholeheartedly. Customers and employees offered gifts at teller windows, and employees organized fun and creative events like barbecues, dances, a fashion show and skeet shoots. Other companies and organizations held their own events to contribute toward the $1 million goal.

When the campaign wrapped up in October, IBC Bank and its community partners had raised $2.1 million, which was used to establish an endowment for a physician training program that is vital to MD Anderson's work on promising new cancer therapies.

Dennis E. Nixon, chairman and CEO of IBC Bank and a member of the MD Anderson Cancer Center Board of Visitors since 1997, is grateful for the outpouring of support. This was the second time IBC Bank had led a community campaign for MD Anderson — it raised $2 million in 2016 — and Nixon said he was confident people would rally again.

"All of us have been touched by cancer," Nixon says. "We have employees who have faced cancer themselves or in their families. Our communities know about the losses we all suffer from cancer, and we know about the important work that MD Anderson is doing. Our campaign shows how we can all join together to eradicate cancer."

Sabrina Dominguez of El Paso, who was featured on the campaign, says IBC Bank and its supporters are morale boosters for cancer survivors like her.

"When I made my donation, I definitely felt like my small contribution was making a difference," says Dominguez, who was treated at MD Anderson.

Once the campaign concluded, Nixon says he asked MD Anderson leaders to guide the bank on the best use for the money.

"That has always been our goal," Nixon says. "Tell us what you need. What can we do to impact people's lives in Texas and around the world?"

Training the next generation of cancer researchers

The IBC Foundation for ICT Endowed Fellowship will allow MD Anderson's Investigational Cancer Therapeutics (ICT) department to train a physician each year in the rigors of patient-based research and early drug development. MD Anderson has one of the largest Phase I drug development programs in the world and currently is evaluating 300-plus promising therapies for many forms of cancer, says Sarina Piha-Paul, M.D., director of the fellowship program. MD Anderson's patient volume and faculty excellence make it one of the few institutions capable of providing this intensive training, she says. Depending on funding, several physicians are awarded fellowships each year, and they are vital to providing patient care and conducting the rigorous evaluation required for potential therapies to move toward Food and Drug Administration approval.

"This fellowship is very important in creating the next generation of clinical investigators as we work to bring new drugs, exciting compounds, to clinical trials," Piha-Paul says. "IBC Bank and its generous donations have helped us support education, which is the cornerstone of clinical research and essential to furthering our knowledge of cancer and our efforts to end this deadly and horrible disease."