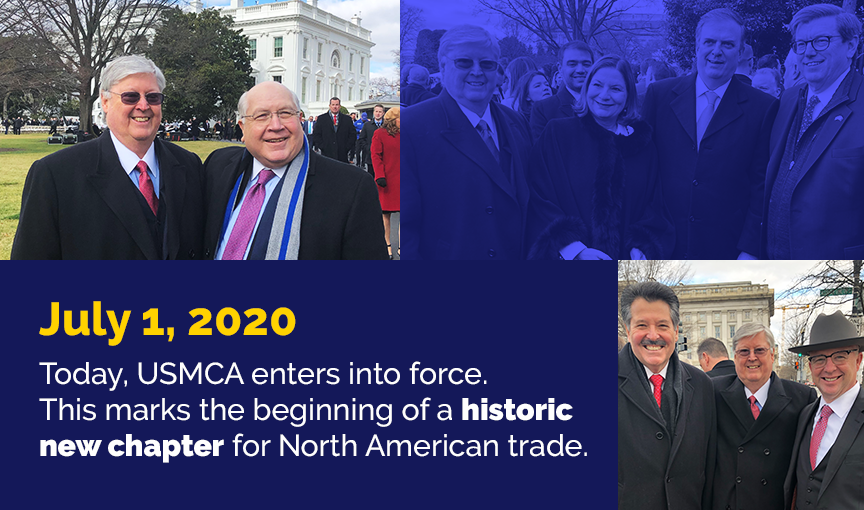 (July 1, 2020) LAREDO, Texas - The United States-Mexico-Canada Agreement (USMCA), which enters into force on July 1, will bring North American free trade into the 21st Century as well as provide a unique opportunity to address global supply chain vulnerabilities exposed by the COVID-19 pandemic.  The updated agreement between the three nations solidifies the world's largest trade bloc, with a combined population of 450 million people and total GDP of nearly $25 trillion.

"This is a major milestone for American workers, businesses and manufacturers," said IBC Bank Chairman and CEO Dennis E. Nixon, who was been integrally involved in promoting North American free trade since the initial negotiation of the North American Free Trade Agreement (NAFTA) in the 1990s, through the more recent negotiation of the USMCA. "I was proud to join my colleagues on the White House lawn on Jan. 29 for the signing of this important agreement and am enthusiastic to witness its implementation on July 1."

Nixon and IBC Bank Corporate International Division head and Executive Vice President Gerry Schwebel received personal invitations from the White House to attend the signing ceremony of USMCA. Both are longtime advocates for free trade and who worked hard for the passage of the trade agreement. Nixon was recently named co-chair of the Trade Policy Working group of the U.S.-Mexico CEO Dialogue. The group strengthens economic and commercial ties between the two countries by convening private sector leaders from the United States and Mexico to provide joint recommendations for their respective governments on priorities in bilateral trade and investments.

Implementation comes at a critical time, with the COVID-19 pandemic dramatically highlighting how U.S. dependence on far-flung supply chains can pose a threat to our public health, our economic vitality and even our national security.  Limited access to critical medical supplies, manufactured goods and technology components have magnified the impact of the pandemic.

"USMCA offers a solution for diversifying our supply chains and bringing more of them closer to home," explained Schwebel. "The pandemic has exposed the critical need for the United States to work toward onshoring our supply chains or, at the very least, enhancing our capacity to supplement existing supply chains.  The implementation of USMCA provides a unique opportunity for us to do so."

Schwebel is widely regarded as a leading expert on international trade and finance. He frequently represents IBC Bank and its customers with top government and business leaders in the United States, Mexico and Canada. His knowledge and unique perspective have led him to present expert testimony before Congress on issues regarding U.S.-Mexico trade, including NAFTA, transportation and logistics, international finance and U.S. immigration reform.

"As we move through and beyond the pandemic, we have a vision for what a new or parallel system of USMCA supply chains might look like. This system would give the U.S. economy the resiliency to minimize or avoid the kinds of shocks it has endured over the past few months," said Schwebel. "It's important that we return to the idea of thinking ‘more North American'. We have to focus on our future and protect important resources such as medical supplies, pharmaceutical production, technology growth and other critical needs to avoid the crisis in supply chains that became apparent with COVID-19. The agreement allows the U.S. and its two closest neighbors to compete effectively and address critical dependencies, while improving the quality of life in the USMCA trade countries."

As the White House and Congress consider an infrastructure program in response to COVID-19, Nixon and Schwebel are advocating for investment in our ports of entry and transportation system as an important next step in the implementation of USMCA.  Such investments would enhance trade with Mexico and Canada, which reached nearly $1.4 trillion last year and supported 12 million American jobs.

"USMCA implementation is only the beginning. Success will require a significant - and long overdue - investment in our nation's trade infrastructure," stated Nixon. "Modern industry relies on the coordination of lead times, inventories and deliveries to maximize efficiency.  Delays or bottlenecks at any point in the logistics process can be disastrous for businesses and consumers, as the effects of COVID-19 have demonstrated. USMCA supply chains face two barriers on this count:  our antiquated ports of entry and our aging transportation infrastructure."

The continuation of the world's largest free trade agreement is essential to maintain the region's competitive advantage and expand on the economic successes of the last 26 years under NAFTA, which is why IBC Bank has been a passionate and dedicated advocate for its ratification and will continue to work for its success now that USMCA has entered into force.

IBC Bank and Commerce Bank are divisions of International Bancshares Corporation (NASDAQ: IBOC), a $12.5 billion multi-bank financial holding company headquartered in Laredo, Texas, with 187 facilities and 284 ATMs serving 88 communities in Texas and Oklahoma. IBC Bank's slogan "We Do More" reflects the bank's dedication to the growth and success of the customers and the communities it has been serving since 1966. MEMBER FDIC / INTERNATIONAL BANCSHARES CORPORATION. Follow our Facebook and Instagram page, @IBCBankWeDoMore. More information is available at ibc.com.