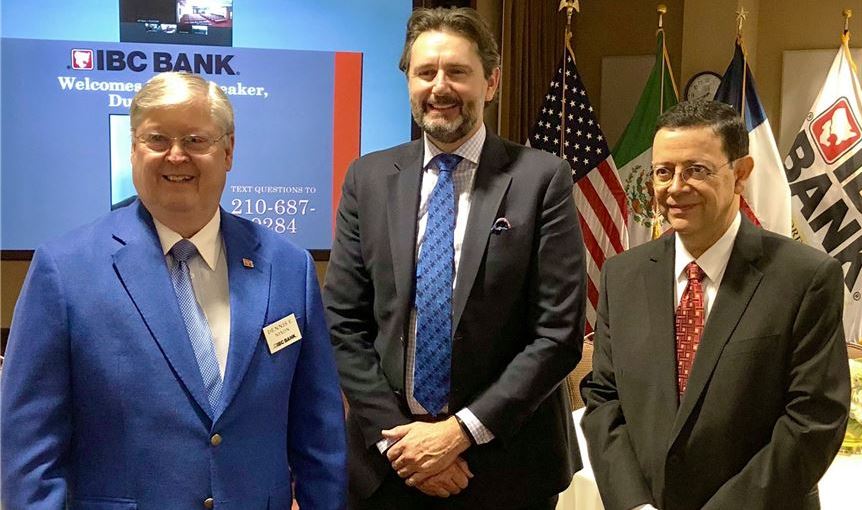 (January 17, 2020) LAREDO, TX - "No other bilateral relationship affects the lives of average Americans on a daily basis more than that between Mexico and the U.S.," said Duncan Wood, Ph.D., Director of the Woodrow Wilson Center's Mexico Institute in Washington, DC.

Wood, an eminent expert on economics and the leading authority on U.S.-Mexico relations, spoke to a crowd of Laredo business and civic leaders on Thursday, Jan.16 about the state of Mexico after one year under President Andrés Manuel López Obrador (AMLO). Wood is the Director of the Woodrow Wilson Center's Mexico Institute. The Woodrow Wilson Center, chartered by Congress in 1968, is the nation's key non-partisan policy forum for tackling global issues through independent research and open dialogue to inform actionable ideas for the policy community.

"After one year in office, we are still waiting for AMLO to show that his government is about more than just good intentions," he said. "Serious problems remain with security, rule of law, economic management, poverty alleviation and the fight against corruption."

"As we look back upon the first year of AMLO's term as president of Mexico, there are areas of concern," said IBC Bank Chairman and CEO Dennis E. Nixon. "When he ran for office, he promised 4% GDP growth, but it appears Mexico has fallen into a recession, and some economists believe it could get even worse in 2020. He also promised to secure the nation, but Mexico's crime rate as exploded in 2019. We are fortunate to have Duncan's insight into what this all means for the border, Texas and the U.S."

Wood is an internationally renowned specialist on North American politics, Mexico and U.S.-Mexico ties who lectures and publishes on hemispheric issues and relationships. He regularly testifies to the U.S. Congress on U.S.-Mexico relations and is a widely quoted source on Mexican politics.

"Duncan is an expert in Mexico policy, trade, energy and so much more, and we were honored to welcome him back to Texas," said Senior Vice President Eddie Aldrete.
"His insight into AMLO's first year in office, the transformation of Mexico under the Morena Party, the USMCA and the future of Mexico was enlightening."

"As business leaders in both the public and private sector working in Texas, we should all be concerned about preserving and maintaining good working relationships with Mexico," said Nixon. "Duncan Wood shed light on what we can expect from AMLO in 2020 and how we can all work together. Our goal is to return value to our customers; we do that by keeping them well-informed with forums such as this one."

An authority on energy policy, international banking regulation and corruption, Wood is currently co-chair of the World Economic Forum's Global Future Council on Transparency and Anti-Corruption and is a member of the editorial board of Foreign Affairs Latinoamérica. He lectures widely at economic forums throughout the United States, Mexico and Canada, sharing his expertise in economics, globalization, energy and the continuing evolution of the former NAFTA policies; now called USMCA.

IBC Bank and Commerce Bank are divisions of International Bancshares Corporation (NASDAQ: IBOC), a $12 billion multi-bank financial holding company headquartered in Laredo, Texas, with 189 facilities and 285 ATMs serving 89 communities in Texas and Oklahoma. IBC Bank's slogan "We Do More" reflects the bank's dedication to the growth and success of the customers and the communities it has been serving since 1966. International Bancshares Corporation was ranked 22nd on Forbes' prestigious list of 100 Best Banks in America in 2019. MEMBER FDIC / INTERNATIONAL BANCSHARES CORPORATION. Follow our Facebook page, @IBCBankWeDoMore. More information is available at ibc.com.